I have to share my annual sappy Christmas post! It’s become tradition. It has also become tradition for one or more of my family members to make me cry when opening gifts. This year did not disappoint. The award for “make Mom sob” goes to my oldest son, John Wellbrock. So, here’s the story:

When John was 2 months old, he suddenly developed an illness which made it difficult for him to breathe. He was admitted into Cincinnati Children’s Hospital Medical Center where he spent 10 days literally fighting for his life. His oxygen saturation was dropping into the low 90’s and at one point into the 80’s. He would cough and cough and cough and cough and NOTHING could stop it . . . except . . . when I would sing “Come Monday” by Jimmy Buffet to him. You see, when I was pregnant with John, Jimmy had just released his 4 disc album set “Boats, Beaches, Bars & Ballads” and his dad and I would blast it through the house for hours on end. This baby LOVED Jimmy Buffet from in utero! So, there I stood, over his crib, wires and tubes attached to his precious little body, my tired momma arms caressing his sweet little face as I sang him his favorite song. Over and over again. And he would catch his breath. 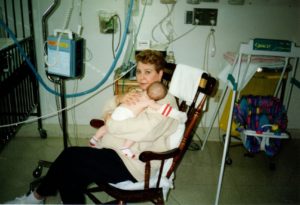 For 10 days this went on. I refused to leave his side. I told everyone who kept suggesting I go home and rest, “I don’t want him to ever open his eyes and not see his mommy standing there, praying for him and taking care of him”. The doctor told me he could die and I was not about to let that happen. 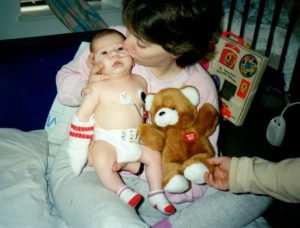 Call it exhaustion or be a believer, but on Thanksgiving night 1993, after I had nibbled at the plate of turkey and the fixings that my mom had delivered me, I sat in the rocking chair, watching my baby boy struggle to breathe. I drifted off to sleep, the light dim in the room, shining from the crack beneath the bathroom door. My eyes suddenly opened when I felt a presence in the room. A peacefulness enveloped my body as I silently watched a magnificent being of light stand at the foot of John’s metal hospital crib. This angel or heavenly being, just watched him. And he stopped coughing and studied. I knew in that moment that John was going to be okay as tears streamed down my face.

John was released soon after and had no long-lasting residual effects from his illness. They never did give us a definitive answer to what was making him ill. They labeled it an “echo virus” and said it was similar to Whooping Cough, but all of those cultures kept coming back negative.

Jump to Christmas 2016. My beautiful son, wrote me a poem about this time in our lives together. He made this gift . . . his words, his creation, our moment captured. 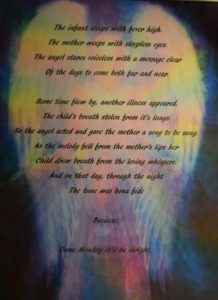 Forever I will remember that “Come Monday it’ll be alright . . for come Monday I’ll be holding you tight.” 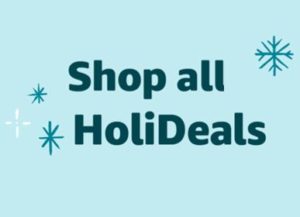