I feel honored to have had the opportunity to sit with Louise Godbold, executive director of Echo, whose mission is “to educate trauma survivors (including parents and service professionals) about trauma and resilience in order to promote survivor empowerment, resolve individual and community-level trauma, and create the safe, stable, nurturing relationships that break the cycle of generational trauma”. We engaged in a beautiful conversation covering such topics as:

Welcome to The Healing Place Podcast! I am your host, Teri Wellbrock. You can listen in on iTunes, Blubrry, Spotify, Deezer, Google Podcasts, Podbean, and more, or directly on my website at www.teriwellbrock.com/podcasts/. You can also watch our insightful interview on YouTube.

“Louise Godbold is the Executive Director of Echo. Before joining Echo in 2010, she worked for over 15 years in the nonprofit field, both in nonprofit management and as a consultant. For several years she was retained by UC Berkeley to provide statewide technical assistance to county alcohol and drug administrations. She has also worked for The California Endowment and the Los Angeles County Department of Alcohol and Drug Programs, as well as innumerable nonprofits, providing assistance with evaluation, strategic planning and creating research-based programming. Louise is the developer and lead trainer for Echo’s curricula on trauma and resilience. She is a trauma survivor and #MeToo silence breaker.”

Learn more about Louise and her mission at: https://www.echotraining.org/

Peace to you all!
Teri

I found the #WhyIDidntReport hashtag a few hours ago. I’m normally not much of a Twitter user, more of a Facebook and LinkedIn fan. But, this one struck a chord. So, I sent off a tweet. This blog post is an extended version of that tweet. 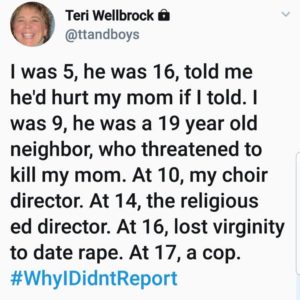 I was five years old.

Let that sink in for just one moment.

Look at that photo up above. That’s me at five years old. Study my eyes. Do you see the sadness? He was a sixteen year old neighbor. He lived next door to my kindergarten best friend. I’ll spare the disgusting details. It was the first time STOP! screamed inside my soul, but could not find its way out of my mouth.

He threatened to hurt my mom if I told anyone.

I was nine years old.

Again, I will give you just a moment to ponder that.

My mom had sent me for a can of soup from our apartment neighbor. His mother was not home, yet he invited me inside. I was hesitant, but he insisted. If I wanted the can of soup, I’d have to come in. So, I did. He led me to a back room, pantry shelves lined the wall, filled with boxes and cans. He dangled the soup can over my head with strict instructions, “You’ll have to earn it.”

He told me he would kill my mom if I ever told a soul. STOP! could not find its way out of my terrified body.

Mom never did ask what took me so long to retrieve the can of soup.

I was ten years old.

He was my school choir director and our church organist. He told me I had a pretty voice. But, I needed private lessons if I wanted a solo. I believed him when he told me I was special. Private lessons quickly turned to “privates” lessons.  I begged my dad to let me quit choir. He didn’t insist on knowing why, but allowed it. Mom was disappointed in me. I mean, how would it look? The choir director was her church friend.

I was fourteen years old.

An awkward freshman in a Catholic school, working in the evenings for our parish priests in the rectory, answering phones and stuffing Sunday’s church bulletin with announcements about picnics and fundraisers. 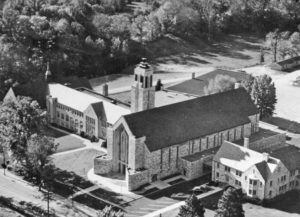 He was the religious education director. I would giggle and blush at his suggestive comments, so unsure of how to scream STOP! even though that was, yet again, screaming in my soul. He followed me to the basement one evening, as I descended to fill the basement fridge with sodas as instructed by the pastor. This time I pushed back, but not before he made one of his suggestions come to life.

I was sixteen years old.

I would tell all the boys, “I’m as pure as the driven snow.” Code for: “I’m a virgin and proud of it.” He was my boyfriend. We were at a party on his grandparents farm. I was drinking. Heavily. He had tried before. Repeatedly. I had warded off his attempts. This night, I was less guarded thanks to beer and shots. He asked me if I wanted to see the family’s race car in the barn. I complied. Knowing in my soul I should not. He took me instead to the other barn. The one filled with cats and a loft. A loft with a rickety old bed. I repeatedly told him, “No” and “STOP!“, but . . . he didn’t.

Upon our walk back to the party, with a soft snow falling like tears from heaven, he turned to me and said, “I guess now only the snow is pure and driven.”

I was seventeen years old.

I had been jumped by a gang of youth while downtown and sexually accosted. That doesn’t belong under this hashtag because it WAS reported. I spent much of my junior year of high school testifying at trials in juvenile court. And having lunch with a detective involved in the investigation. His friends threw around the words “jail bait” quite a bit as they gave their fellow officer a congratulatory slap on the back.

He asked my parents to take me to dinner downtown to celebrate the final conviction case. They obliged. He was a police officer, right?

On the drive toward the city, a Knight Ranger song played on the radio and he turned to tell me, “This is our song.” My stomach flipped and STOP! silently screamed . . . yet again.

We never made it downtown for dinner. Instead he took me to his apartment. I resisted and eventually convinced this naked police officer to take me home. His children’s photos hanging on the wall helped me win that battle.

He instructed me not to speak of it. To anyone.